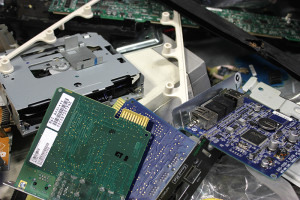 • The nation now dumps between 300 million and 400 million electronic items per year, and less than 20% of that e-waste is recycled. (source)

• E-waste represents 2% of America’s trash in landfills, but it equals 70% of overall toxic waste. The extreme amount of lead in electronics alone causes damage in the central and peripheral nervous systems, the blood and the kidneys. (source)

• According to the UN Environment Program, the worldwide total for e-waste could be 50 million tons per year. (source)

• In 2009, approximately 25 percent of TVs, computer products, and cell phones that were ready for end-of-life management were collected for recycling. (source)

• Recycling one million laptops saves the energy equivalent to the electricity used by 3,657 US homes in a year. (source)